AIL Madrid - a Letter from our Director

My name is Chris Haworth, and I am the director and founder of Academia Internacional de Lenguas Madrid (AIL Madrid). I’d like to take a moment to tell you a little bit about our Spanish language academy, its history, quality, and why so many students choose AIL for their Spanish studies.

Though the academy actually began fifteen years ago, in the tiny living room of my Madrid city center flat, the beginning of the story dates back to when I first arrived in Madrid in the year 2000. My initial experience of the city was intoxicating; the language, the nightlife, and the vibrancy and history of the city itself. I fell in love with Madrid immediately, feeling a thrill every time I had the opportunity to introduce visitors to my new home, and knew Madrid would form a long term narrative in my life.

After three years, during which I achieved a near perfect use of the Spanish language (my British accent remains and will forever accompany me!), I felt the pull to learn something new so, taking advantage of some holiday time, went to France to do a short intensive French course. While there, I met the director of a language school in Montpellier who gave me my first insight into an academy from the teaching and directing perspective. At that moment, a small seed was planted and slowly began to take root in my mind. Was this what I wanted to do? I loved learning languages, loved knowledgeable, enthusiastic teachers, and knew what it took to engage a student. So why not start my own academy?

A few short years later, AIL Madrid was born. With the help of a university friend, Brishen, and Dori, the soon-to-be Director of Studies, all working from our various, old fashioned Madrid flats, we worked hard to turn an idea into a living, breathing school. We created a website, rented a space, and interviewed teachers. I knew from the beginning that I wanted dedicated, native teachers: people who had studied to become linguists or educators, who were passionate about the language, who cared for the students, and who understood and enjoyed discussing Spanish culture. We also dedicated ourselves to quality and, over the years, have proudly earned the most important, international accreditations and become one of the leading names in Spanish education.

In the summer of 2006, we met with our first student, Stephanie. Stephanie was from Nuremburg, Germany, and provides an example of the academy/student relationship that still exists at AIL today. She was a friendly, warm, 26-year-old with a real determination to learn Spanish quickly. She studied with us for three months and became a member of our small family. After her course, I hired her to work in the administrative office, and we have continued our friendship ever since.

It was my dream when we began that AIL would be a home away from home for its students with a unique atmosphere built on discovery, positivity, and (most importantly) fun. I also believe that learning should take place outside of the classroom as well; your experience with AIL begins with your classes but extends into after class activities, weekend trips, your accommodation, and your general experience in Madrid. For this reason, we started the tradition of ‘Noche de Copas’, where students and staff alike gather on Friday night for conversation and drinks, as well as the cultural classes and excursions offered by AIL.

Though it would have been easy to lose this familial feeling as we grew and expanded over the years, I am proud to say that today every student, new or old, who walks through our front door feels an immediate sense of community.

Whether you are with us for one week or one year, I, your teacher, or a member of our Student Care Team will know your name upon arrival, greet you, and invite you into our family. We offer endless support, and are fully invested in your success while learning the Spanish language. 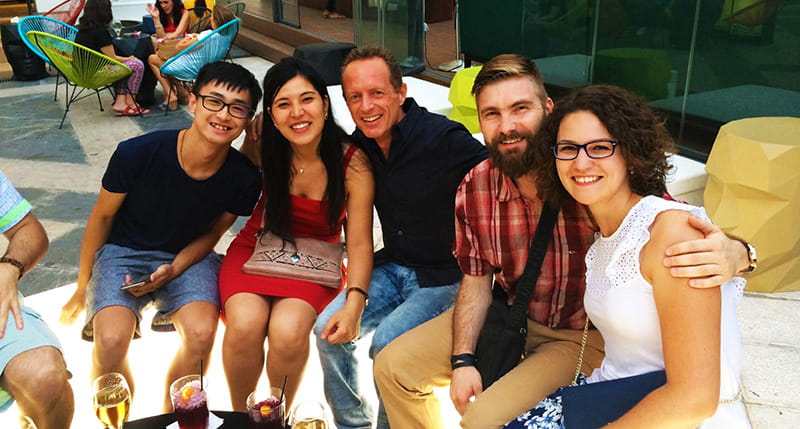 We are located in Madrid's Golden Mile, part of Barrio de Salamanca (the most coveted neighborhood in the city), and provide the highest level facilities in the field. Our classes, following our tradition of community, are small, intimate, and facilitate a strong bond between teacher and student.

I know firsthand the feeling of arriving in a new country, and the butterflies of learning a new language; with this personal experience in mind, we have built a school that hopes to make your transition and adventure the best possible. As an academy, we are internationally-minded and flexible with our students. I want to ensure that you have a course that fits your level and needs perfectly, as well as a full and happy life here in Madrid.

My greatest hope for AIL Madrid is that we can share with you what I first experienced when coming to Madrid all those years ago: the rush of falling in love with the city, the pride of learning a new language, and the joy that comes from understanding Spanish culture.

I look forward to adding you to our ever-growing community; welcome to the family!